As a large brown seaweed, kelp are some of the fastest growing plants on the planet. They dominate temperate, coastal rocky shores worldwide, where they create 3 dimensional structure under water, providing a habitat for many species of fish, invertebrates and algae, while capturing and storing nutrients and atmospheric carbon dioxide.

Around 70% of Australians live, work and recreate near a coastline that supports kelp forests. These reefs play an important role for our identity and cultural values, and in our national economy; supporting a broad range of tourism, recreational and commercial activities that contribute more than A$10 billion annually.

Australians are very much coastal people, and in our blue front yard, we have these amazing temperate marine ecosystems that are like nowhere else in the world 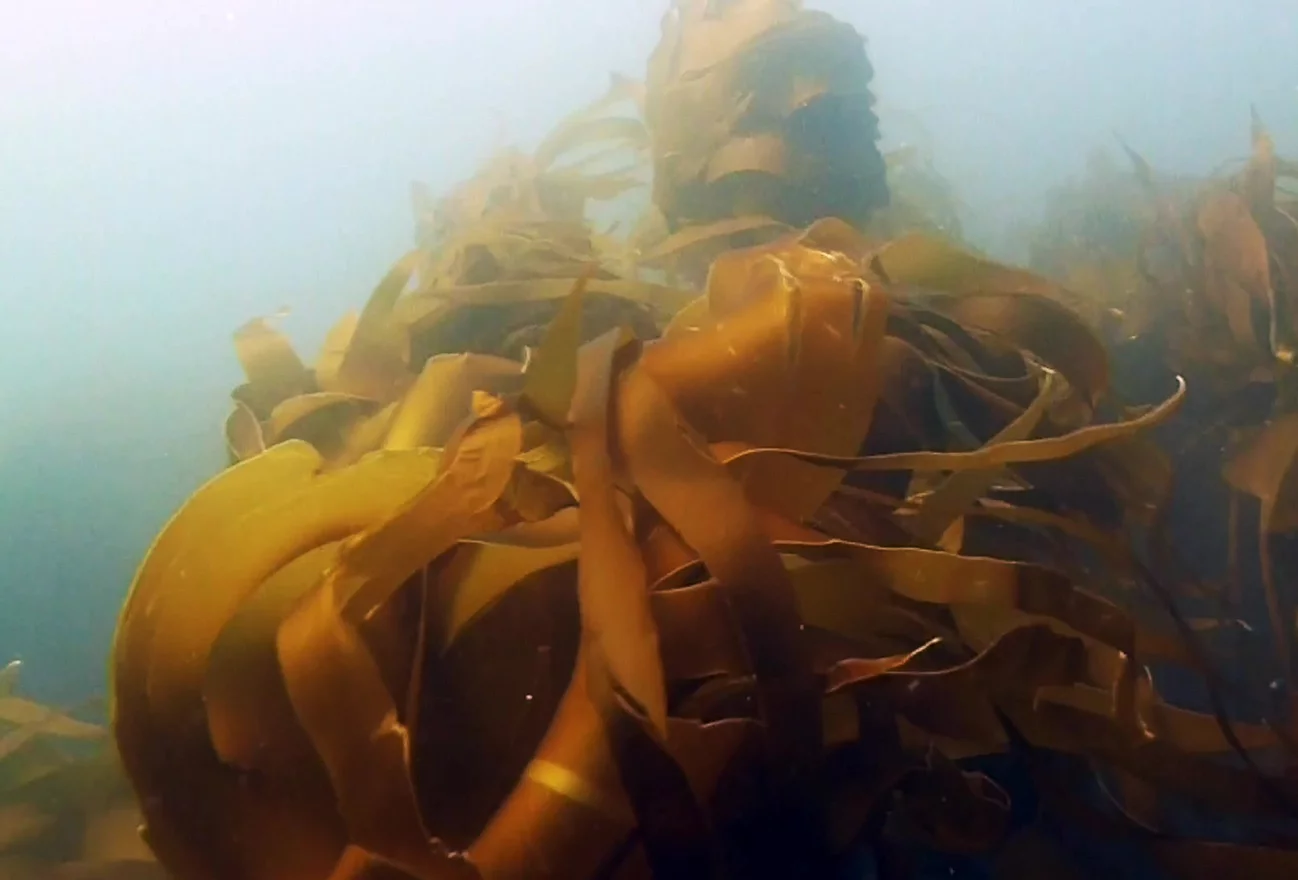 A Health check for kelp

Seaweed such as kelp has the capacity to address many problems that humanity is facing, including at least 7 of the 17 United Nations Sustainable Development Goals.

In 2013, as part of an international working group convened by the US based National Center for Ecological Analysis and Synthesis (NCEAS), Wernberg and colleagues compiled a data base of >10,000 time series points for kelp forests globally.  Based on this first global health check for kelp forests, it was found that 40–60% of the world’s kelp forests have declined over the past 50 years. This is due to many factors including human related impacts such as overfishing, direct harvesting, nutrient run-off and, in particular, global warming including increasingly frequent marine heatwaves.

To address these declines, Professor Thomas Wernberg’s team at UWA and marine scientists around the world, are now looking for solutions to prevent our underwater forests from vanishing.

Kelp forests provide ecosystem services that are very valuable in terms of economic activity, the biodiversity that they support and the cultural values and identity of Australians 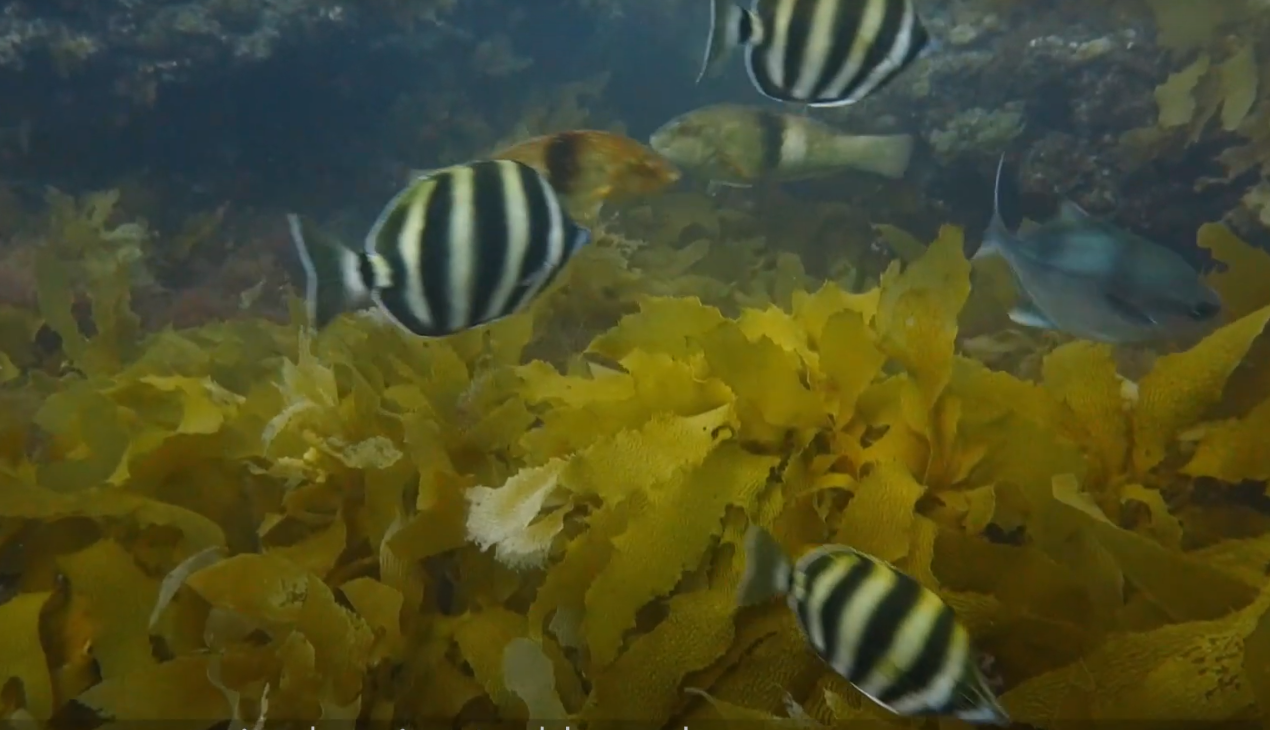 40-60% of the world’s kelp forests have declined over the past 50 years. Image credit T Wernberg

Kelp forests in Australia dominate the interconnected ecosystem of temperate rocky reefs stretching 8,000kms around the southern coastline of Australia, from the mid-west coast of Western Australia, along South Australia and Tasmania, and up along the east coast to the northern border of New South Wales.

This biodiversity hotspot is home to thousands of species including seaweed, giant cuttlefish, sea urchins, leafy sea dragons, reef fish, snails and white pointer sharks. Depending on the group, somewhere between 30-80% of the species in this reef system are found nowhere else on the planet. The kelp species that dominates this ecosystem is the Golden Kelp Ecklonia radiata.

Although around 70% of Australians live within 50km of a temperate coastline, few are aware of their spectacular blue front yard and its importance. This motivated Professor Wernberg and his team to not only understand the ecology of the kelp forests, but also to work to boost local and global awareness of the this truly unique temperate marine ecosystem.

In 2014, a group of leading marine ecologists from across Australia met in Perth as part of the International Temperate Reefs Symposium hosted by Professor Thomas Wernberg and his team at The University of Western Australia. In a public forum addressing issues facing Australia’s temperate reefs and kelp forests, the group descended on a strong consensus of the unifying features of the ecosystem straddling Australia’s southern coastline.

Led by then UWA PhD student in Professor Wernberg’s team Dr Scott Bennett, now an ARC DECRA Fellow at the University of Tasmania, the group later published a paper which gave an identity to the marine ecosystem: The Great Southern Reef. An accompanying video offered a glimpse into the marvels of the little-known environment. Working with the team, Wernberg Lab alumnus Dr Stefan Andrews, a subsequent Rolex Scholar and film maker, created a website dedicated to understanding the Great Southern Reef. Stefan is also producing a film as well as educational resources for schools about the GSR.

Given how large, unique and valuable this natural temperate marine ecosystem is to Australia, we thought that there would be no better name than the Great Southern Reef 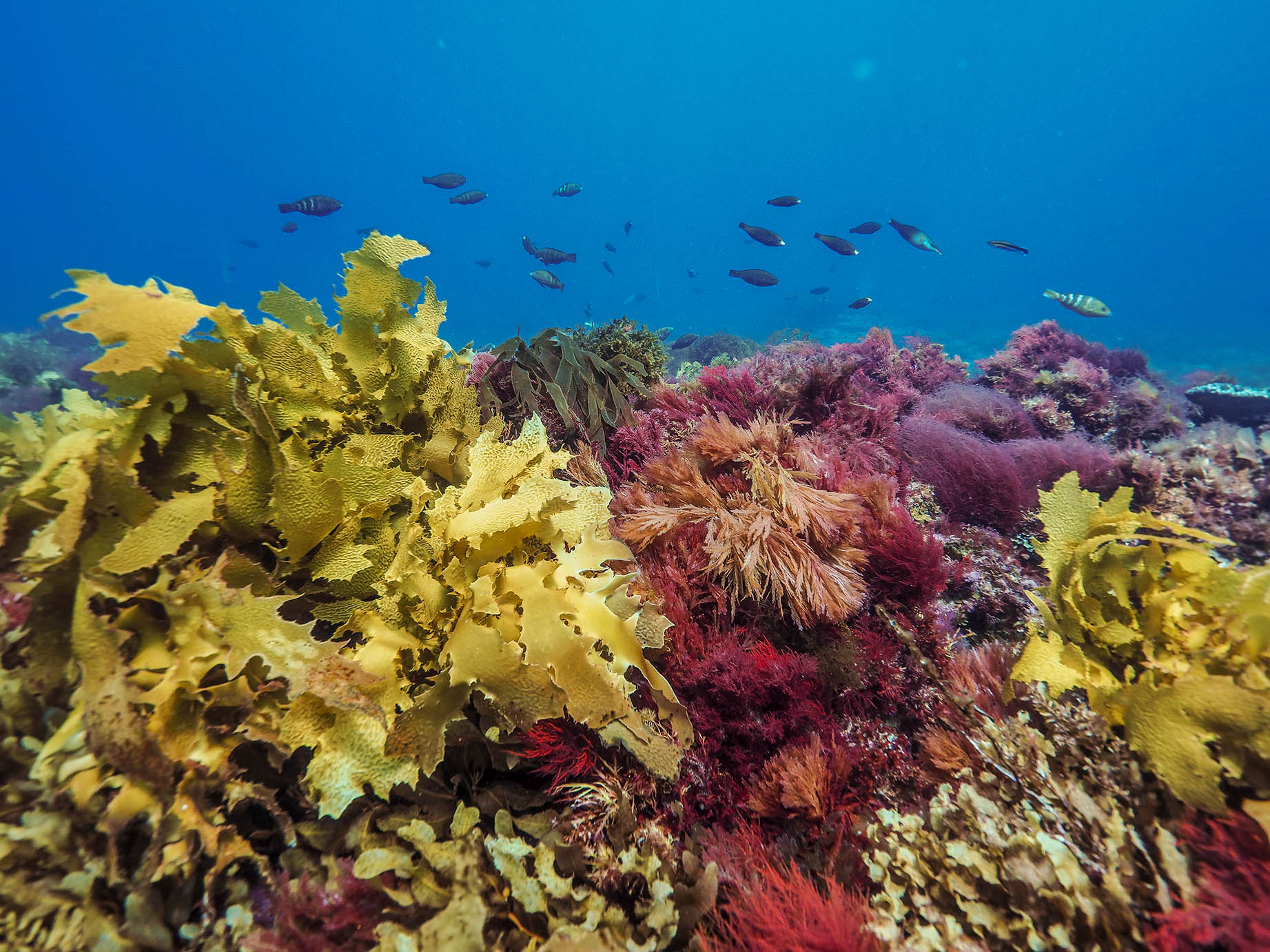 The Great Southern Reef has since earnt recognition as one of the most species-rich and unique areas of the world for temperate marine flora and fauna. The term has gained popularity in mainstream media including by BBC’s book the Blue Planet II and Greenpeace.

In 2019, The Great Southern Reef was acknowledged by Mission Blue’s founder, ocean pioneer, marine biologist and ocean activist Dr Sylvia Earle, as a Hope Spot. Hope Spots are recognised as places that are critical to the health of the oceans. Dr Sahira Bell, another one of Wernberg’s PhD students, led the entry to boost recognition and motivate increased protection and research efforts for this incredible part of our ocean.

In Australia, decisions affecting the Great Southern Reef are divided across five states and the federal government. As such, the Wernberg team will soon release a White Paper, which is intended to guide the various government authorities in policies that recognise the interconnectedness of the Great Southern Reef and provide consistent and united strategies for its protection against marine heatwaves and other pressures into the future.

are discrete, prolonged warming events in the marine environment.

In 2011, Western Australia experienced an extreme marine heatwave, which lasted 10 weeks and decimated 100km of kelp forest at the north western edge of the Great Southern Reef. That event featured ocean temperatures up to 6℃ above normal and it is considered one of the most intense marine heatwaves recorded anywhere in the world, with devastating impacts across WA’s marine environment.

Over the past 20 years, the team has repeatedly surveyed 2000kms of coastline from Cape Leeuwin to Ningaloo Reef. Based on this extensive data collection and modelling, they estimated that 385km2 of kelp forest was wiped out by the 2011 marine heatwave. In a 2016 paper, the team concluded that the event was responsible for altering the ecological structure of the ecosystem. Among others because expanding turf algae and an increase in tropical grazing fish species was preventing the reestablishment of kelp.

Realising there was no common benchmark for measuring marine heatwaves, Wernberg and an international team of ecologists, oceanographers and atmospheric scientists proposed a framework and categorisation scheme for marine heatwaves, based on similar schemes for cyclones and other extreme events. This helped increase scientific and public awareness of these severe marine events and the framework is now being applied globally to the study of marine heatwaves.

The Wernberg team have received funding to support their work in marine heatwaves from the Australian Research Council (ARC).

One of the biggest issues in restoring kelp forests is the difficulty of planting kelp under water. Traditional methods often rely on scuba divers manually planting the reef with kelp one by one. This can be inefficient, expensive and potentially dangerous.

In 2020, with funding from the ARC, and in co-collaboration with scientists at the Institute of Marine Research in Norway, the team developed green gravel – small rocks seeded with kelp – as an efficient solution for the safer, and potentially large-scale restoration and replenishment of damaged kelp forests.

The novel restoration tool starts in the lab. At a tiny 20 microns, the early life stages of kelp secretes a sticky substance which it uses to attach itself to the small rock. Both the kelp and rock are sourced locally. Once established, the kelp and their rock anchors can be scattered from a boat onto the reef.

Once in the ocean, some kelp species can reach full canopy height in about one year. Those found locally in Western Australia will generally reach 1-1.5m and will sway with the waves rather than stand upright in the water. They still serve many of the same functions as other taller kelps. 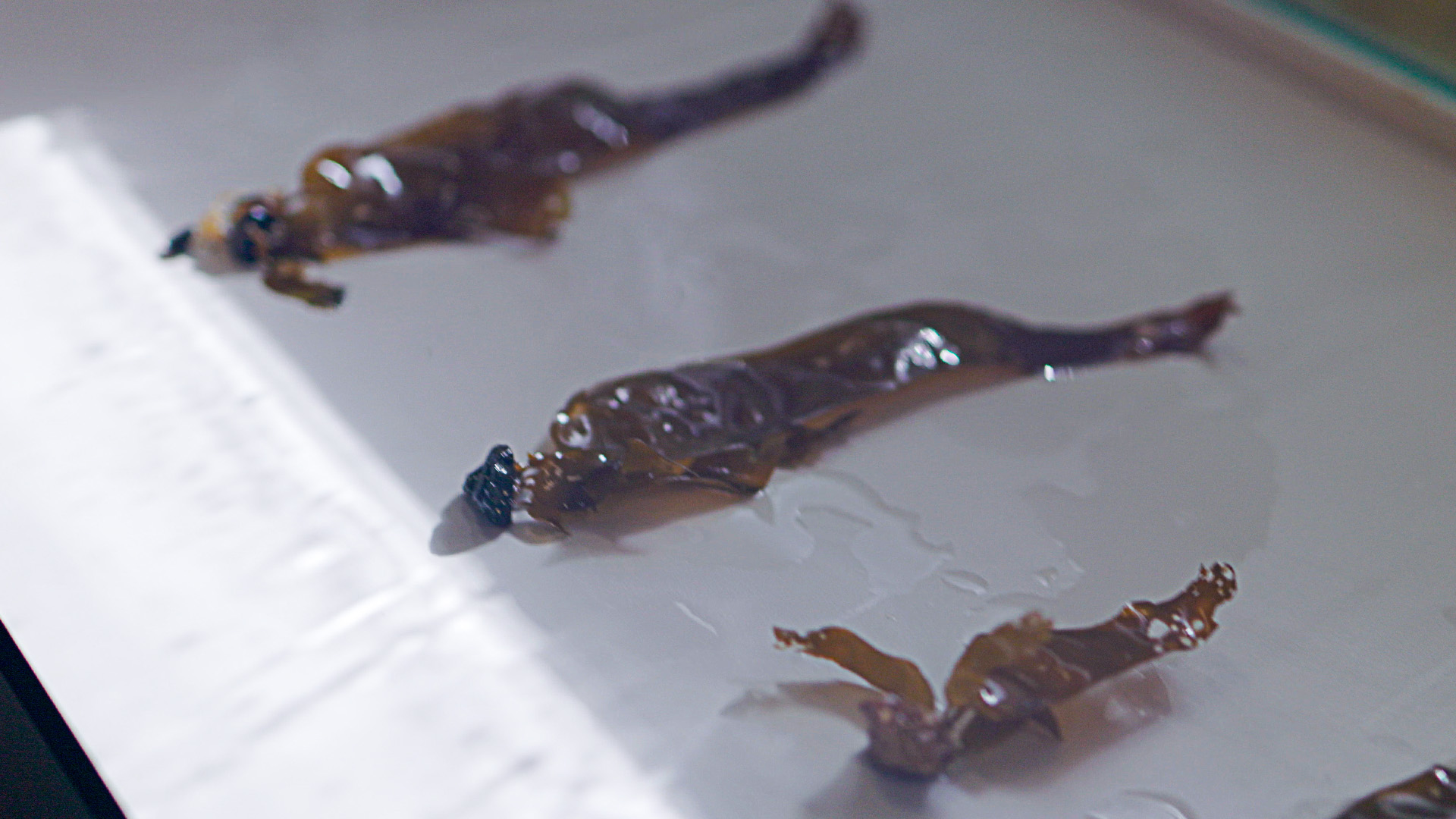 Kelp is attached to a small rock before casting onto the reef.

The green gravel action group includes organisations and >15 projects around the world that are trialling and testing these green gravel techniques. Countries include Norway, Portugal, through Sea Forrester, USA, Canada and Latin America. The group also liaise with Australian government entities and researchers including Dr Melinda Coleman, NSW Department of Primary Industries (NSW DPI), as key collaborators on the research to understand the use of this green gravel technique in kelp forest restoration and to understand how to increase the resilience of kelp forests. Initial trials have shown promising results and now the team are working to develop the technology for cost effective, large-scale production.

Another recent collaboration is with the Schmidt Marine Technology Partners who have funded the team to develop a concept to upscale green gravel seeding and make it available to community groups and local municipalities.

Let’s green the blue front yard. We want to promote the value proposition for kelp: not only ecological, but also socio-economic services that kelp forests provide

The Wernberg team are currently applying for permission with authorities In Western Australia to undertake local seeding and restoration of kelp forests that were lost in 2011 and haven’t come back.

Interest in the team’s work is also growing from fish and seaweed farmers who see the potential of green gravel as an alternative revenue stream. The team are encouraged by the interest. The technique shows promise as a technology to restore kelp forests at a large scale. For the restoration to be scalable, commercial support is required along with broad scale community group involvement. 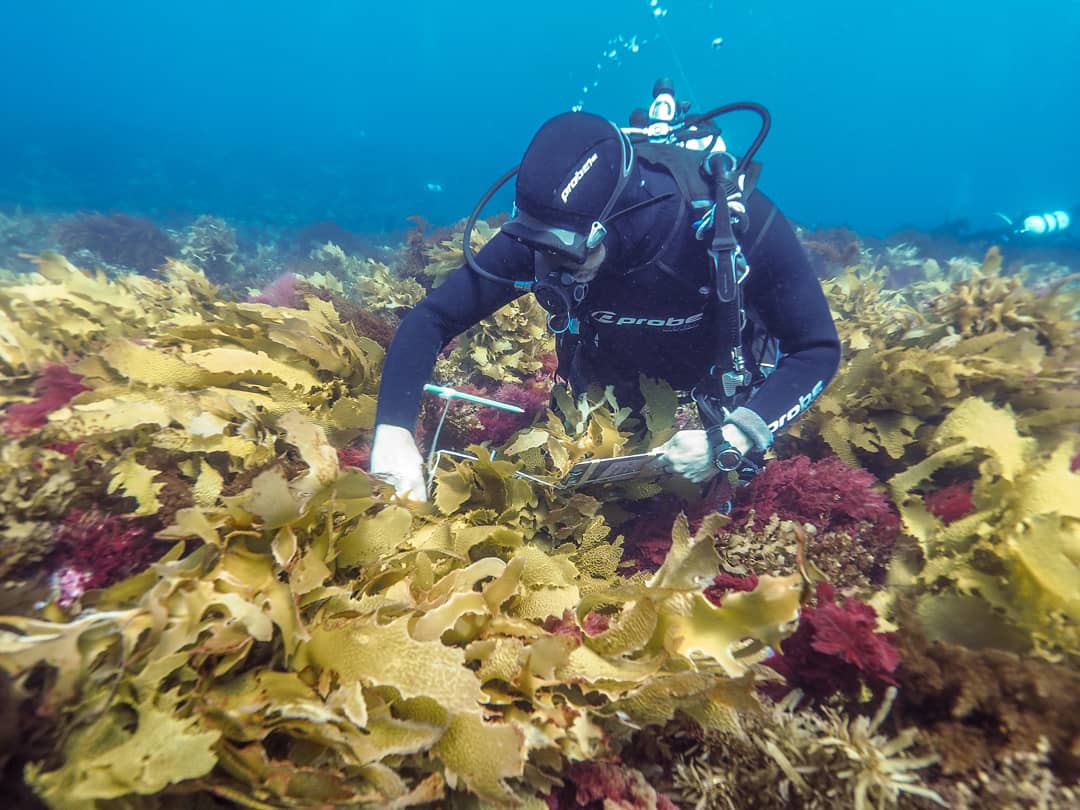 Researching the health of kelp forests in the Great Southern Reef

The Wernberg team conduct their research from the UWA Indian Ocean Marine Research Centre. The purpose-built facility boasts multiple laboratories and teaching spaces, such as Watermans Marine Laboratory on the coast 30 min drive from the UWA main campus. This newly refurbished facility allows running sea water to be accessed for experiments and research. It is one of the only facilities in the Southern Hemisphere for big tank and mesocosm experiments that examine the natural environment under controlled conditions.

Field work provides a window into what is out there and the perils that this amazing environment is facing. Making underwater observations is absolutely critical to ideas and experiments, and it builds the connection that inspires the next generation of marine scientists to do something about these challenges

Tweets by @UWAResearch
Measuring with the highest precision